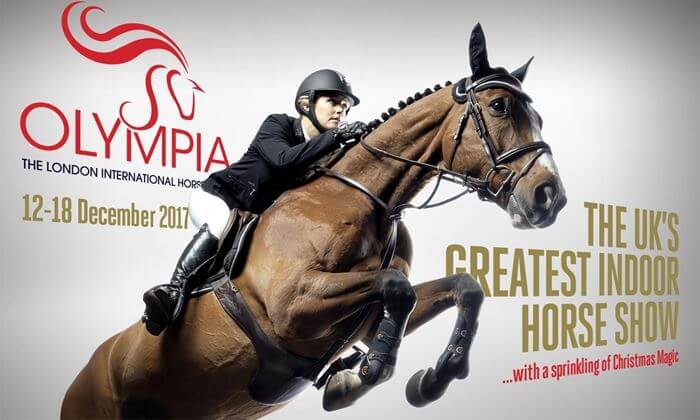 PLEASE NOTE: WE WILL BE ARRIVING IN THE AFTERNOON, BUT OUR TICKETS ARE FOR THE EVENING PERFORMANCE

2018’s edition of the Show welcomed over 90,000 spectators across six days of world-class equestrian action. As a result, it’s recommended that prospective buyers act quickly to avoid missing out on attending the greatest equestrian Christmas party, with tickets expected to be highly sought-after once again this year. Olympia will host several other top international Show Jumping events over the course of the week, culminating in The Turkish Airlines Olympia Grand Prix on Sunday 22 December which always proves to be a highlight. In 2018, Italian rider Alberto Zorzi defended his title claiming back-to-back wins. Guaranteed to get spectators out of their seats and cheering will be The Shetland Pony Grand National. The competition – which pits a talented line-up of young jockeys and their Shetland ponies against each other in a fun-filled event – has seen an astounding racecard of talent in the past, including Olive Nicholls, daughter of 10-time British National Hunt Champion Trainer, Paul Nicholls. Joining the crowd-pleasing entertainment will be a Show classic, The Kennel Club Dog Agility, in which some of the country’s most skilled and energetic canine competitors will battle it out against the clock for victory.